After freaking out at how good the record was, I asked Sick Sick Birds frontman Mike Hall to run through their album "Gates of Home" and drop some wisdom about the songwriting process on each track. The record was released on vinyl by Toxic Pop Records in March of 2012.

From the canceled issue #1 of Eighty-sixed Fanzine. 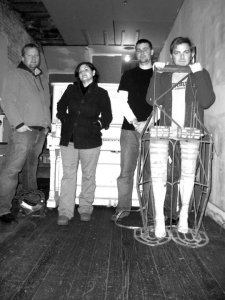 I think the lyrics on this one are pretty straight forward. Mostly, this is about the idea that it is easy to critique someone else’s words and actions, but much more difficult to be in the position to actually make things happen. Candidate Obama can offer one-sentence definitive statements like “I will shut down Guantanamo,” but President Obama finds out that maybe (for whatever reason, pick a reason) it’s easier said than done.

It’s also a reference to passive, sarcastic snarkiness in the realm of politics. Snarkiness can be an excellent cover for laziness. Just say, “They’re all a bunch of bums,” to mask the fact that this is a topic of which you know very little. This song is about being jaded on the jaded.

Writing this song was really uncomfortable and challenging. I was trying to imagine how difficult it must be for a kid to come to the realization that he/she is gay. Adolescence is hard enough when you are deemed “normal” by the masses. It is an awkward, unsure time. Imagine trying to navigate through that time with this secret growing inside of you. All of the public debates over laws and public policy are one thing. This song is intended for more of an individual and personal level. I was writing not so much about the global level of intolerance, but rather the one-liners that you encounter from people that you love and trust. I imagine that would create an environment where you feel like you have nowhere to turn. How could it not? 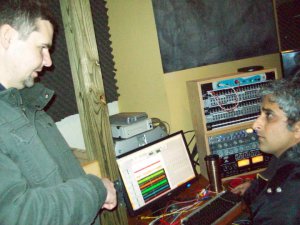 Great opportunities often come at inconvenient times. This song was based off of a short story by H.G. Wells called “The Door in the Wall.”

Musically speaking, I knew when we wrote this that it was going to sound like an early Cure song. Normally, when I am concerned that a song sounds too similar to another band, I try to address it in the mixing process. For example, “this sounds like a Smiths song, let’s mix it so it sounds like something off of Husker Du Metal Circus.” For some reason, on this one, I decided to just go with it, and let it sound how it wanted to sound. So Dan (see Dan Black, below) mixed it so that it would fit right in on Seventeen Seconds.

This one is about an aging scenester trying desperately to hang on to her social relevance. Same bar, same drink order, same heckling routine for the bands that come through town. The crowd at the bar is slowly getting younger as she is getting older. The more songs I write, the more I realize I am revisiting themes that I have written about before. This one seems like a companion piece to The Thumbs “All Lesser Devils,” that Bobby and I wrote together. 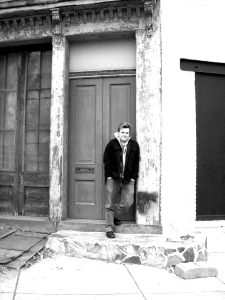 This is a punk rock “grass is always greener” story about someone moving from town to town, based on an idealized view of a band or scene. When the person gets to the new town and sees the warts, he moves on, not realizing that the warts are the good stuff. I think it is more rewarding to make something better instead of constantly moving on in search of some dopey, nonexistent punk rock paradise.

The opening guitar line was the first thing that I wrote for this song. I have always been fascinated by the relationship between chords and melodies. Specifically, I like songs where the melody repeats itself even when the chords change underneath it. Take something familiar and look at it in a different way. That’s what I was trying to do in the beginning. Starting out with a bright poppy melody, and then when the words come in, change the chords underneath and it darkens right up.

The first line I wrote for the song was the one about driving past Dahlgren Lab. It’s a reference to the Dahlgren Naval Surface Warfare Center, which I have driven past many times on Route 301 in Virginia. It’s just such a dark-sounding name to me, and I have always wanted to use it for something

You know how when you mow the lawn, the back and forth creates a striped pattern? I was looking at the pattern while I was mowing, and the line “gonna’ cross the shipping lanes” kept going through my head.

So then I started thinking about a fictitious old guy contemplating the (lack of any) meaning in his life. He used to dream big – he was going to do big things. Never really got around to it. Never actually had any ideas of what to do, just the idea that he WANTED to do something. So, he gets it in his head that he’s going to invent something to cross the shipping lanes. Well, lots of things (boats?) can already cross shipping lanes, but that did not deter him. I tried to be really vague in my descriptions, because that is how the character would interact with people. He “just built the greatest thing,” but it’s unclear whether he actually built anything at all, or if he’s just a crazy guy disappointed in his life. 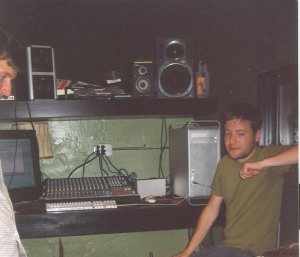 We did some shows in California in 2010, and got to spend some time with our friend Anna, a transplanted Marylander living in Hollywood. For whatever reason, in some conversation, Anna noted that olives tasted like tears. I wrote it down in the margin of whatever book I was reading.

This song is based on the short story “An Occurrence at Owl Creek Bridge” by Ambrose Pierce. I first read this story in middle school, and always loved it.

The past two records (“Heavy Manners” and “Gates of Home”) were produced by Dan Black, of The Oranges Band fame, among other things. Dan is the first engineer I have ever worked with that really “produced” our records. He has a great, unassuming way of taking raw tracks and, by addition and subtraction, adding to the flavor of a song. Sometimes he helps to build a song based on our descriptions of what we envision, and sometimes he goes off on his own based on where he hears it going. It has been a great relationship.

This is a case of a song that I thought was decent, but needed something to make it really good. I had the idea to mash it together with Olive, but other than that, I had no idea what to do for it. So I asked Dan to work some magic do whatever he wanted with it. If the song ended up just so-so, we would have left it off the record and gone with 10 songs. Dan really completed this song – he added the pounding tom beat, and chopped the music in the beginning so it started with vocals. He also added the Gang-of-Fourish guitar parts and the synth. This ended up being one of my favorite tracks.

During the production phase of the records, it’s always a treat to get an email from Dan with a track that he has been working on. It’s like X-Mas morning. We love that guy, and really consider him a member of the band. 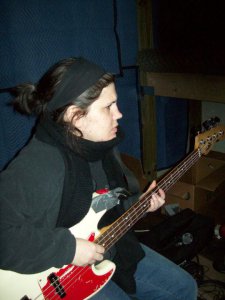 A friend of ours was writing a blog called Aural States that was devoted in part to the local music scene in Baltimore. He was embarking on a new project and asked to come over to the warehouse and record some live versions of a few of our songs for a segment on Sick Sick Birds. In addition to recording 3-4 of our regular songs, he asked if we could come up with a short instrumental track that would serve as the Intro for the show. The intro for the show later became New Shoe Leather.

I guess that I have written about Baltimore and Maryland in a number of songs over the years. In this song, there is a line: “A true middle man like Maryland.” Maryland is technically “southern,” as it is the first state below the Mason-Dixon line. But people in the deep South tend to think of Maryland as northern, and a lot of people in the Northeast tend to think of Maryland as southern.

For any historians out there, I highly recommend Maryland: A Middle Temperament by Robert J. Brugger.

Scaffold is the oldest song on the record, with its origins going back to 2000. We had put out The Thumbs “All Lesser Devils,” and were working on writing the songs that would become the final Thumbs record (“Last Match”). I had a couple of parts written that I really liked. So, at practice, we would try to finish this song by coming up with some complementary parts. Then, we decided that the new parts that we had written were strong enough to be a song on their own, so we removed the original parts and finished off the song. This happened maybe three other times – every time we used these parts to write a new song, it turned out that the originals did not exactly fit right. It was like these parts were the scaffold that we used to build the songs for the record. Once the building was complete, we removed the scaffolding and used it to build the next song. This was not our intention, but it’s the way it ultimately worked out. 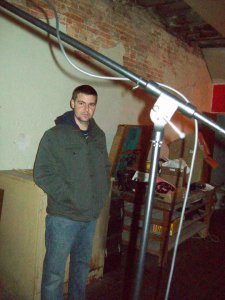 It wasn’t until Last Match was written and released that the song “Scaffold” was finally finished. We recorded a demo of the song in 2002, but The Thumbs were done and the song was shelved. We played Scaffold occasionally during Sick Sick Birds live sets, but never recorded it until the “Gates of Home” sessions. I really like how different the Thumbs and Sick Sick Birds versions ended up sounding.

The lyrics for this song are a continuation of a Thumbs song called “Where’s the Battle Cry?” that I co-wrote with my wife about a person helping a good friend through a bad break-up. Once the heartache from the break-up dissipated, the friendship suddenly dissolved. It seemed like the relationship had been so dominated by the processing and aftercare involved in dealing with the breakup, that afterwards, the person could not handle the emotional reciprocity necessary for the friendship. Maybe the friendship was a constant reminder of darker times. Or maybe the newly-renovated version of the person simply no longer needed the friendship. This reminded me of the original parts of Scaffold. The lyrics are about being someone else’s scaffolding, helping to rebuild someone, and then being disassembled and stored for the next project.

This is the only song that I have ever worked on where there is such a synchronous relationship between the music and the lyrics.

Daniel Black (guitar and keyboard on Gates of Home, additional instrumentation and arrangements throughout)

Produced and mixed by Daniel Black.

Design and layout by Michael Welch.