Here's a column from the amazing Jeff Varner who runs Lost Cat Records and plays in Thanks. After exchanging e-mails about bands, songwriting, punk, etc. for months and reading some pretty great posts on the internet, I got the idea that this dude would be good at writing a column. A few short days after asking him to write something on the topic of songwriting for 86'd zine, this is what showed up in my inbox. I'm sorry about this not coming out in print form, but hopefully someone will prod Jeff into a monthly column somewhere else... MaximumRockNRoll? - Wells

From the cancelled issue #1 of Eighty-sixed Fanzine. 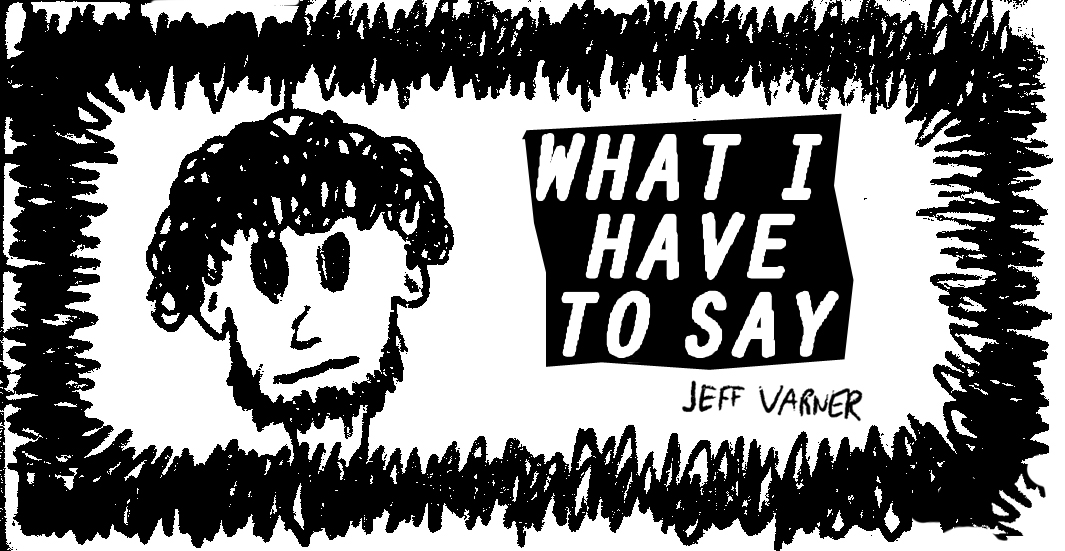 I sit around all day putting off my top priorities. Lately I've been indescribably lazy and lethargic, but I'm getting pretty good at describing the indescribable. When I wake up in the morning (between noon and two P.M.), I take in a couple huge breaths of air. For whatever reason, my lungs and stomach object to the morning breaths, causing an itching painful sensation in my entire torso. This instigates a series of passionate coughs. When my eyes first open in the morning, the first thing I do is anticipate this ritual discomfort. It's a dreadful emotion, but I get over it quickly thanks to my second daily anticipation; coffee. I take a deep breath, then another deep breath, then I go make my coffee. I pour six to twelve cups of water into the stinky and soiled sludge factory, before cleaning out the grounds from the day before. It's nasty, especially when I've been out of town and mold is collecting on the aging coffee flavored dirt. If light can penetrate my brew, it's not strong enough. I fill my stained white "Electric Fetus" coffee mug, and top it off with three ice cubes. These cubes enable me to chug the bile in seconds without burning my stupid mouth. I repeat these steps until I've had four or five filthy mugs worth. Some days I drink six, if I lose count.

Things get interesting after my coffee, but not really. There's only one thing on my mind; working on the new Thanks record. I think about working on the record, I talk about working on the record, I listen to my demo takes for the record, I become frustrated with my preamps and external hard drives not working properly, then I go sit with my friends and discuss other peoples records. I put off my top priorities, like I said. Maybe I'm afraid that I can't meet the absurd expectations I have of myself, and so I procrastinate by talking music. We talk about the music we love, and we talk about the music we can't stand. I don't know which entertains us more, but we talk for hours. Once in a while, when nobody is around, I actually get ambitious and start working on the record. I sit there trying to convert my ideas into lyrics, which often makes me want to pull my hair out. Lyrics "come to me" at the weirdest times, and I write them down on the weirdest things. I've got some pizza hut receipts in my room, from when I used to be a pizza ninja at Pizza Hut. When I was on the clock, I would get an idea, grab a pen, and jot it onto a blank piece of paper. I could summon all the paper I wanted from the receipt printer, thanks to a nifty little manual feed button. When I got home, I would pull the baby song from my pocket, and throw it onto the floor. I've still got a hundreds of these abandon songs scattered across my disastrous room.

My dog peed on some of them a few weeks ago, because my room is his litter box. They weren't important ideas, so I threw them out. In his most recent offense, he defecated a mountain of filth onto my JBL sound reinforcement manual, which had to be thrown out.

My mom calls me creative, I guess this is what "creative" people do. We're about as organized as a bowling ball in the coral reef (but songs have to come from somewhere, you know). One time I wrote a song about Pizza Hut's garlic sauce. Please don't go out and buy this sauce. It's very addictive, yet doesn't taste very good. One time we sold twelve hockey puck sized containers to a single customer. He claimed that he was "a slave to our garlic sauce". He was addicted, but I bet he didn't actually like the stuff. Anyway, I don't know why on earth I would write a song about Pizza Hut's garlic style sneeze condiment. I guess I was mainly inspired by the idea that the sauce was full of preservatives. It was a song about a girls remorse for partaking in science class animal dissection, as well as the horrors of war. I ask myself; how did garlic sauce provoke my creative energies to write a musical piece with this sort of subject matter? There must be something/s wrong with me. My point in short; you can write a song about whatever you want, as long as you're in touch with yourself.

People ask me how to write lyrics, and I usually tell them the same thing; "figure out what you have to say, and then say it". I tell them that songwriting is nothing more than self communication. The better "in touch" I am with myself, the more self relevant and personally significant my songs become. If I'm singing about something I don't really care about, than I usually end up loathing the song. The more I care about my songs, the better I perform them. People can see me more clearly when I write and present my music more accurately with my emotions.

When I talk to people, I don't feel like I'm communicating optimally. I feel like I'm almost always saying the wrong thing or sending the wrong vibe. I feel like I'm speaking in the wrong tone. I feel like my words are misunderstood. I often get the idea that I'm being too dramatic, or too serious, or not serious enough, or too subtle. When it really counts, I rarely utter a sentence which correctly lines up with my intentions. When I'm writing a song, I feel that my emotional accuracy improves.

I want to tell people what's on my mind, but I can't say it all. I can't seem to get it all out. I feel like my ideas are a painting, which sits thirty or forty feet behind glass. Music helps me push it forward. At times I become so sick and frustrated with life that I start to become mentally fatigued (this is when I think my weirdest thoughts). One day a few months ago (back when I had three jobs) I was particularly miserable and sick of it all. I was working with a dying patient as a PCA, among many other patients who were in rough shape. In addition to the stress of PCA work, I was cooking at Pizza hut, teaching drum lessons, working with the band, and overcoming a ridiculously painful heartbreak. I chewed my reality the way caged animals chew the bars of theirs, and came to the following conclusions;

We are natures delusions, scared and confused. We create delusions of our own. Sometimes we call them songs, segregating and manipulating them into albums on various formats. We tirelessly try to communicate our perceptions to others, we modify and repeat the ideas of our musical ancestors, peers, heroes, etc. As both songwriters and humans, we're sprinkled across this gargantuan yet simultaneously microscopic sphere, floating majestically through space. If we have anything at all, it's something to observe. Artists are champions of observation. Songwriting is among the most accurate methods of human communication. We can convert our ideas and emotions into lyrics and melody. I'm going to go clean the house now, because I feel bad about myself.