First round of reviews back for RATIONS NOISE / URD, second pending 13 June 2019

A bunch of reviews of the RATIONS NOISE / UNKNOWN RIVER DRIVER split LP/CS have started popping up online and in print. Scroll down to peep 'em.

Still waiting on MRR and Bad Transfer (Nate Wilson, Matt Average, more). Psyched for those. Also, I've got about 10 more copies set aside to send out for reviews. Any ideas? Email me or hit me up on Twitter.

First up is the venerable Razorcake zine. An abridged version of CJ Miller's very humbling review appeared in both print and online. After the magazine came out she posted the full review on Instagram. Here's the full text:

“Whatever you want to read in this first sentence that will make you listen to this split - imagine you have just read it. This is an important album. No hyperbole. Complex, emotionally affecting, fiery, equally cathartic and despair resounding, politically agitating and agitated clarion.

I will preface with the fact I am a huge fan grrl of Rations and all of their previous releases. You should listen to them as well. But that has only some bearing on my feelings per this release (Unknown River Driver includes members and frequent collaborators of Rations - Brian Donnelly, Tia Meilinger, and Christopher Lamagna - and Rations Noise seems to be a new iteration of two Rations members, Beaker and Wells, delving into sonic territory different from their bands previous incarnation.) This release is incredible and stands on it's own very confident feet.

The Unknown River Driver side is powerful, grit and gravel, guitar based punk presented with profound honesty and sensitivity of expression. Painful personal content with thoughtful social and political nuance. All of the songs expand and contract, saturated with sadness and note bends. Standouts for me are two of the more catchy contributions - "Isaiah" and "Misery & Liberty". The latter begins with a captivating and dance-able drum beat/hand clap hook which acts as a lovely counterpoint to the lyrics and emotional tone of the guitars/bass. "It worsens until I don't feel." The song is a dynamic and incendiary representation of feelings I've known so well in my life - when we live so long with suffering it becomes familiar; when pain and despair dwell so comfortably in our hearts and bones and bodies our awareness of them dulls. The misery becomes so familiar we no longer notice it.

Now for the Rations Noise side. A lesson for me in so much. Firstly - to refrain from preconceptions before taking anything into myself. Based on this being a noise project centering on drone warfare I expected something far more aggressive, dissonant, sonically dense and brutally oppressive - especially considering the horrific subject matter. Instead what unfolded was a beautiful, often gentle and pensive, cinematic and sweeping piece of experimental music.

I will almost always refrain from using other bands as reference points in reviews or critiques because i think it promotes narrow mindedness and homogenization of thought/style but I want you to listen to this and sometimes drawing comparisons to other bands seems to help draw new listeners in - so if you imagine a collaboration between Explosions in the Sky and 3RA1N1AC you'll perhaps have an idea of what transpires here. The arrangements are sparse and oscillate between tones of hope and of melancholy. The piece opens with grinding metal formed into a pulsing beat and bubbling, glitching patterns of sound reminiscent of computer processing. I believe this serves to establish a sonic theme relating to drone operation and the computerized language of these war machines - the technological vector/buffer that allows for detached execution and destruction from operator to victims. Dramatic and melodic guitar swells behind these patterns, setting a surprisingly hopeful tone. A layer of two slightly robotic voices - one low, one higher pitched, evocative of traditional masc/femme vocal presentation quote Jack Gilroy's poem "Hancock Litany for Good Friday". "Men of the 174th Attack Wing: Stop the Killing. Women of the 174th Attack Wing: Stop the Killing. Men and Women of the 174th Attack Wing: Stop the Killing.” - CJ Miller, Razorcake

Next up is a review from Yellow Green Red Blog (Matt Korvette from Pissed Jeans). Here's a screengrab: 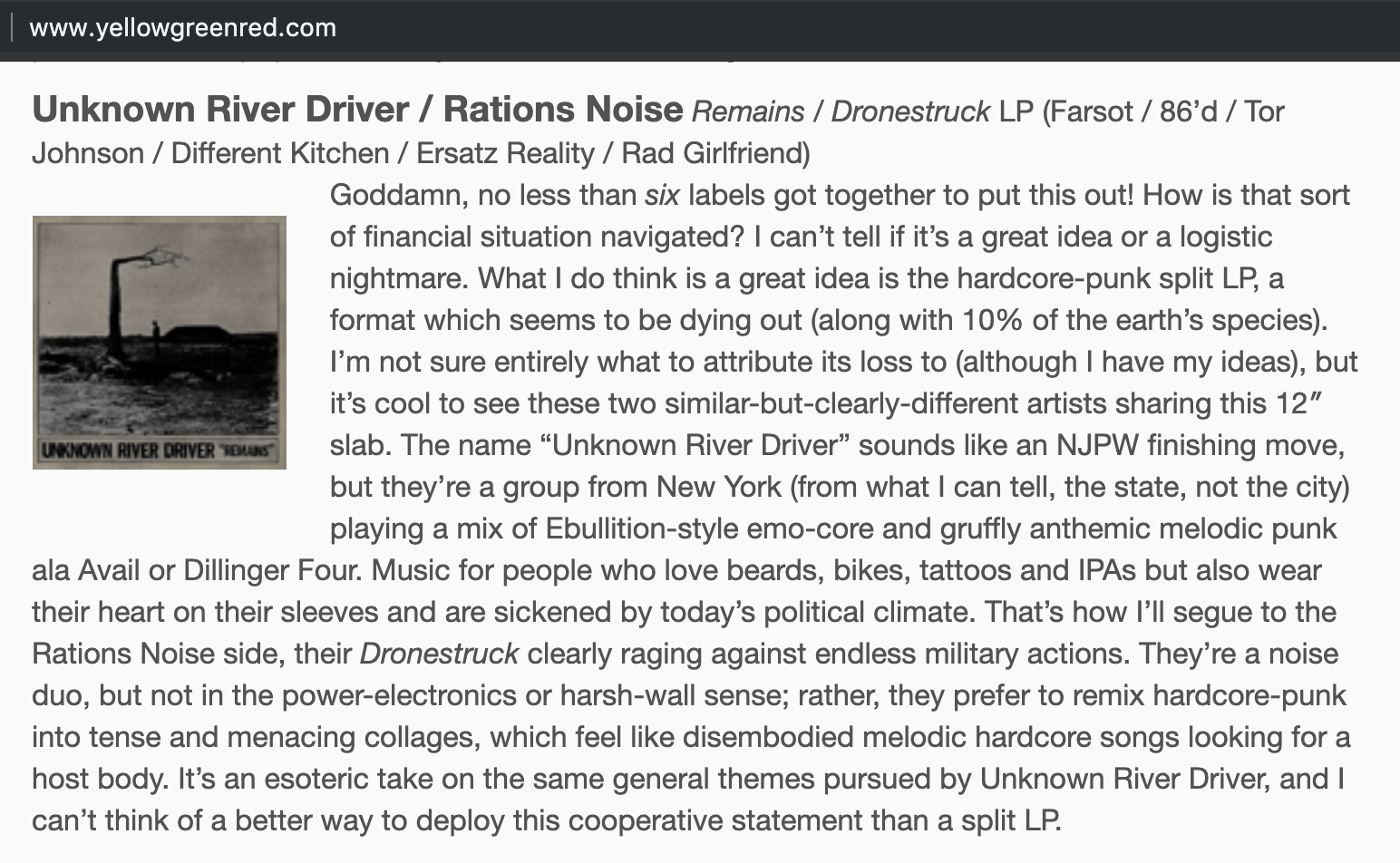 And here's a review from Jersey Beat! 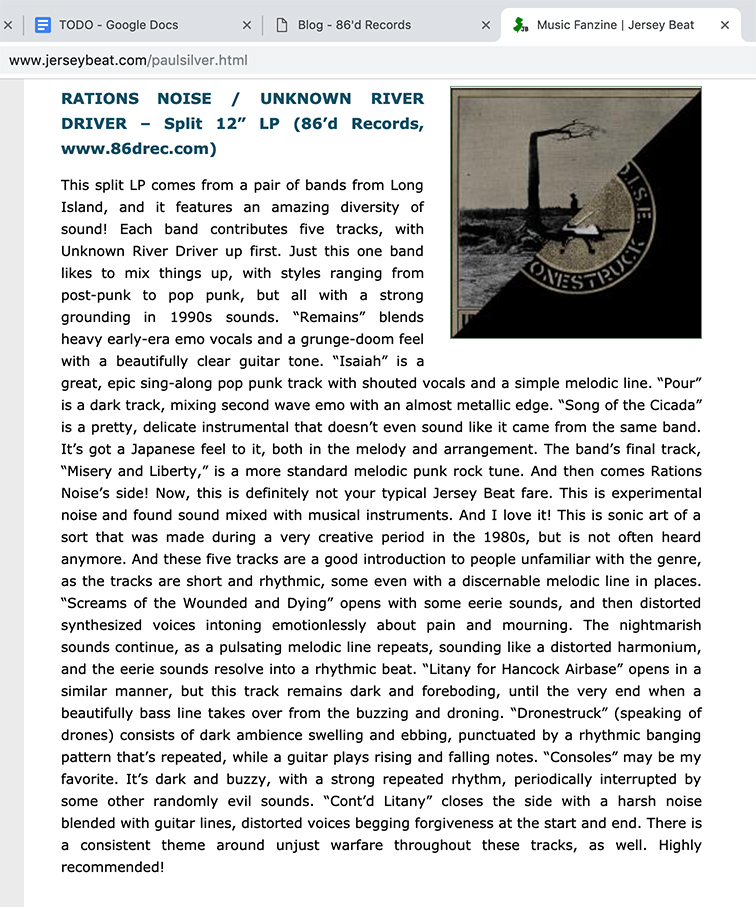 And a couple from Svbterranean and Apathy and Exhaustion respectively. 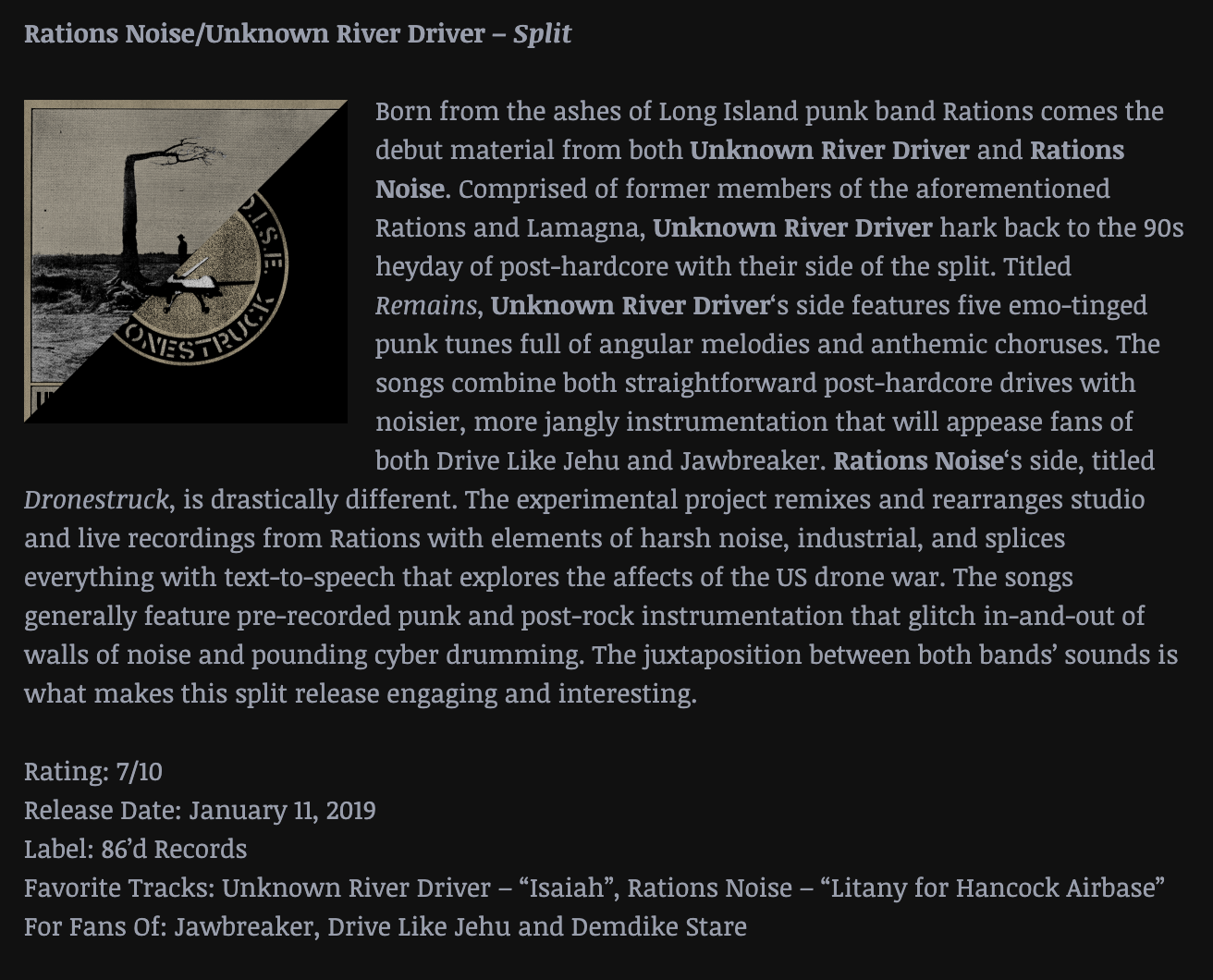 Thanks for reading all,