The news that On The Might of Princes was canceling their appearances at Long Island Fest and St. Vitus this weekend made me think of the liner notes I wrote for the "Where You Are And Where You Want To Be" reissue CD from 2004-ish. I figured I'd post them here along with some pictures of the band. I'm not sure if this is an edited version, so please forgive any mistakes! 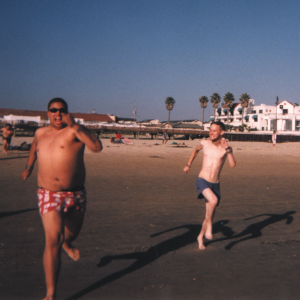 My earliest memory of On The Might Of Princes was drinking 40's in the King Touchless Car Wash parking lot with Tommy and Jason and a bunch of other dudes in the summer of 1999. Jason had recently moved from Connecticut - or maybe Florida or some shit - and he was living with his old man in Selden. He'd hooked up with Tommy through some kind of ad somewhere looking for a band. You know, the kind that reads, 'skinny red haired guitar guy looking for band. Influences: Sunny Day Real Estate and Bad Brains.' Tommy and Lou had known each other from high school, which of course, back then, was just a couple of years back. I'm not sure where Nicole fit in, but I remember her hitting the drums so hard that I just kinda figured she was mad at them. Enriquez had come around later on, bringing tighter and more technical shit to the table. Although, he was always better at getting people mad at him, than getting mad at the drums.

So in 2000, On The Might of Princes trekked out to Westchester, PA to record with Arik and Mike at the Creep House. It was the same punk-infested suburban colonial where Long Island bands like Sleepasaurus, Striped Basstards, Kill Your Idols, and Contra had all recorded before them. I was doing Traffic Violation Records with my buddy Brian at the time. We briefly bounced the idea of asking those dudes before they left if they wanted to do the record on Traffic Violation. Of course, we never got around to it. A couple of weeks later Brian and I got our hands on a 60 minute TDK tape of the songs that would become "Where You Are and Where You Want To Be." I remember pretty vividly, us sitting there in the Sea Port Diner parking lot, just listening to song after song. My jaw dropped, and (along with the curly fries) I had a lump of jealousy and regret in my stomach. I wanted to put this record out, and badly. But of course, it was too late for that. Probably about 30 seconds in to the tracking the first song, Arik had asked them to do the CD on Creep Records. I'd have to settle for doing the layout.

I don't remember who's idea it was to put that photo of Jason and Andolpho on the cover. But once we had it in there, we knew it was perfect. To me, it represented a lot of what was Long Island punk at the time. The shot was taken when Contra and On The Might of Princes arrived on the west coast during summer tour in 1999. It was one of the first jaunts that this new crop of Long Island bands had taken that far out. I still love looking at the juxtaposition of two boneheads from Long Island running down the beach away from the palm tree in the background. I think the photo also has something to say about the cooperative scene that we had back then. There was no ego bullshit from the band about it just being Jason on the cover, much less any bullshit about some dude from a whole 'nother band being on there too. But all that stuff is academic, what totally rules about this cover is it's sheer ridiculousness. It's a big fat black guy and a pale, freakishly skinny white guy running on the beach in their underwear. The cover was better than just unmarketable, it actually made you feel uncool buying it. It was perfect.

Maybe it was that sense of uncool, or the rejection of ego - or even the aloofness that led to such a goofy record cover - that allowed people to feel that On The Might of Princes was such an important band. Being into On The Might of Princes felt a lot like being in On the Might of Princes. If you were there, just in the room while they were playing, you were part of it. I remember seeing 'em in a basement in Smithtown once. When the music dropped out for the sing songy part in For Meg everyone there knew they were part of something important. I looked over and saw Deserae crying and singing along. It was obvious she was just as much a part of it as any of the guys playing the instruments. Mike Rok Lok was there screaming his heart out. I saw Meg too, and felt the same thing. Even Craig Hughes was singing along. "And I'll scream it till your ears bleed, You'll always have a friend in me." I was singing too, and I knew in my heart I was part of it. It felt good.

Eventually, I pressed up the 12" LP version of "Where You Are, and Where You Want To Be" on Traffic Violation, I even did the second and third pressings of the CD. And now that it's years later, I think I know why I got that feeling of jealousy and regret at the idea of it not coming out on Traffic Violation. Looking back over the 28 releases that we did, the whole thing wouldn't have made as much sense without that record. If that catalog of vinyl and CDs was going to tell any kind of story about what was going on around here back then, "Where You Are, and Where You Want To Be" absolutely needed to be on it. And to my relief it was.

I don't think any of 'em would disagree if I were to say that all of us learned a shit-ton of lessons about life since those days downing 40-ouncers in parking lots. But this record isn't about what we've all learned and gone through since it came out. This record is about what we knew - and who we were - back when it came out. This record was the best shit Long Island could come up with, and it was fucking mint. It doesn't matter what the band did after this, or what everybody is doing now, or who's still friends with who, or whatever the fuck. On The Might of Princes was amazing. And this record is still amazing. And all those people that felt like they were part of this band - and helped this band be what they were - this record is still theirs, and they get to have it forever.